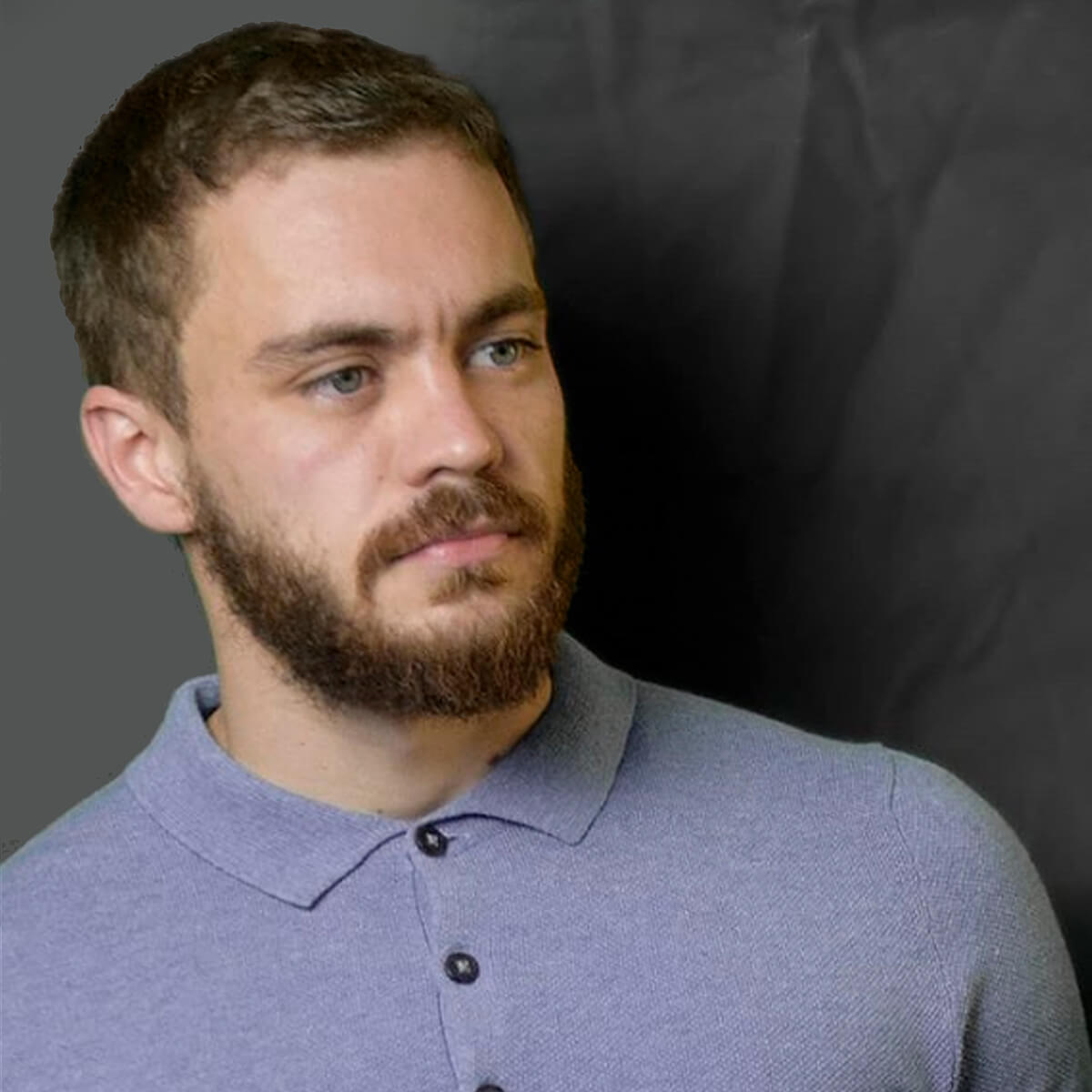 If you’ve sat down to watch Klaus, the critically-acclaimed animated Christmas film that premiered in theaters and on Netflix this past November, you’ve also seen the handiwork of David Gau, a 2014 graduate from DigiPen Institute of Technology Europe-Bilbao’s BFA in Digital Art and Animation program. As a layout and background artist at Sergio Pablos Animation Studios in Madrid, Gau worked for roughly two years on a number of major scenes, environments, and more.

“I’ve never seen so much talent together, gathered in one place, giving the best of themselves to do their specific role to make this movie happen,” Gau says, summing up his experience on the project.

The film, which imagines an origin story for the legend of Santa Claus, has already been hailed by many as a new “Christmas classic.” Set in a wintry village called Smeerensberg, located not quite at the North Pole on a remote island in the Arctic Circle, the film follows the journey of a young postmaster named Jesper who develops a friendly bond and toy-delivery partnership with Klaus, an old man living in a nearby forest. Together, their acts of kindness begin to heal a divided community, where two clans have been locked in a bitter, generations-long conflict.

From a critical perspective, the film has been a resounding success for the Spanish production studio. Klaus currently boasts a 92% “fresh” rating on Rotten Tomatoes, as well as an astounding 98% audience score. 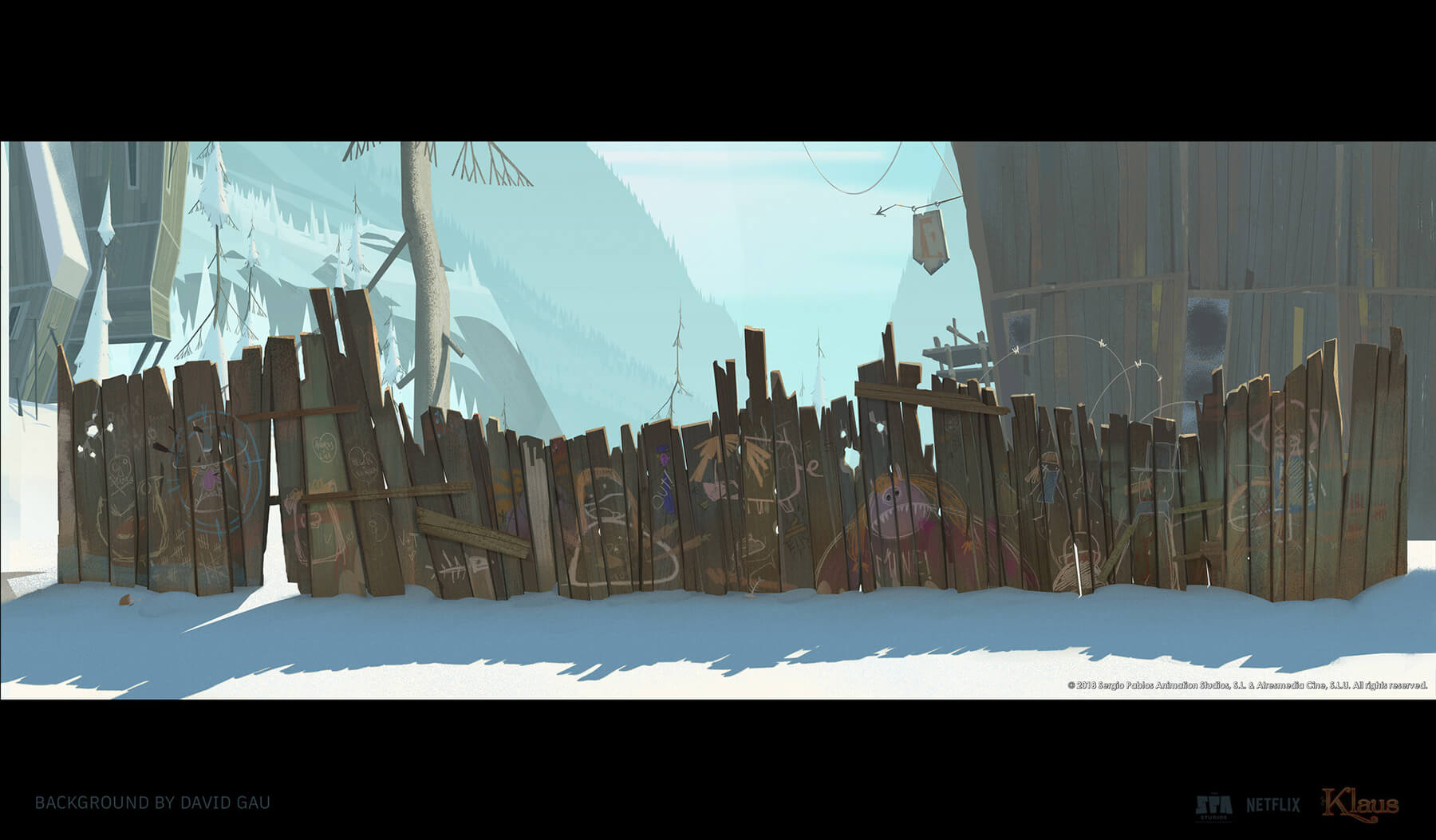 “To see the final results, it’s amazing,” Gau says. “You are working on a piece of fiction, but the feelings that they provoke in the audience are real, and that’s what motivates me.”

Prior to joining the SPA Studios crew, Gau was working at Mondo Tv in Santa Cruz de Tenerife. While, there, Gau worked mainly as a concept artist for a variety of animated television series, including a children’s show called Invention Story about the crazy adventures of an inventor fox living in a town of rabbits.

“I designed the main village, main protagonist’s house, town hall, the main estate of the city, the props,” Gau says. “We were a small crew.”

After about a year at Mondo Tv, Gau received word from a coworker that the SPA Studios was recruiting layout and background artists for an upcoming feature film. Upon his friend’s recommendation, Gau applied and was soon hired onto the team, which was only about 40 people at the time.

“From the very beginning, I felt the warmth of the studio. It was a very familial crew,” Gau says. “I started to implement all I learned from the amazing art directors, Szymon Biernacki and Marcin Jakubowski. They gave me brushes, a style guide. They made us some tutorials, and then we started to develop various designs, props, and environments.”

Although Gau is specifically credited as a layout and background artist, he also worked occasionally as a concept artist, posing artist, and more.

Some of Gau’s contributions can easily be spotted when viewing the final cut of the film. When the main character Jesper first arrives at Smeerensberg, for example, he passes by a gigantic hanging whale skeleton that was based on one of Gau’s early concept designs. Later, when the heads of the Krum and Ellingboe clans meet under cover of darkness to discuss a temporary alliance against the protagonists, each of the two groups carries a tall wooden banner bearing the image of a fighting clansman. Those banners were also based on Gau’s concept sketches. 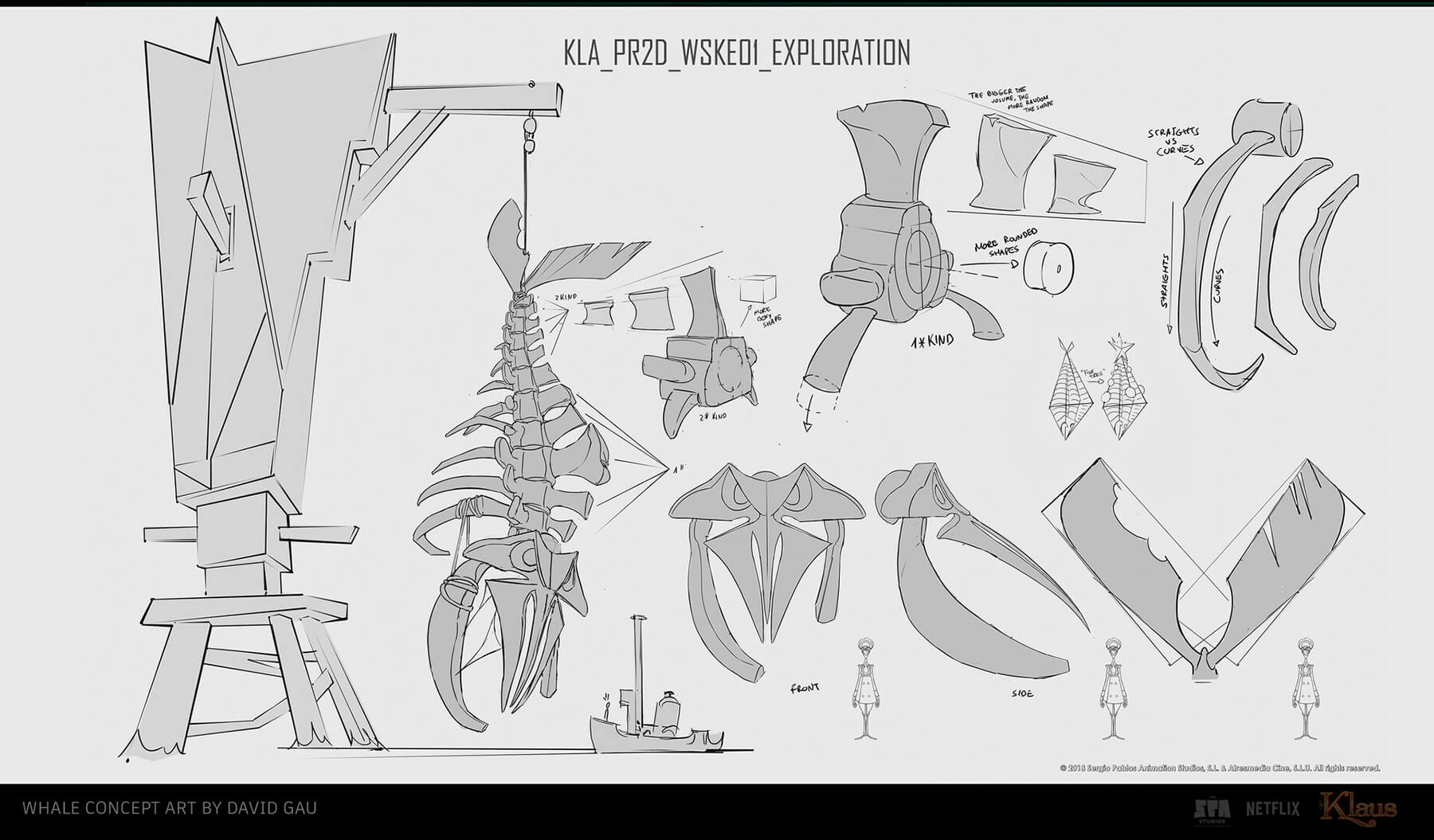 When asked about his proudest contributions, Gau points to a series of oil paintings that appear midway through the film, when the heads of the Krum and Ellingoe clans are recounting their long history of fighting — a history depicted in several humorous painted battle scenes from different time periods.

“The two first battle scenes were color painted by me. The second two were painted by another great artist named Sergio Mancinelli. And then there is the flipbook, where we see, very fast, the history of both clans, traveling from the prehistoric time to the 12th, 18th, and 19th centuries. In that quick sequence, I painted the musketeers, the duel, and the baroque painting,” Gau says. “They allowed me to use my brushes, my own style. It was a kind of freedom.”

While Gau earned the trust of the film’s directors over the course of the production, the experience was intimidating at first.

“When I arrived at SPA, it felt like a big company where I was just a little tiny artist. And I felt overwhelmed sometimes. Sometimes there was tension, and I would think to myself, ‘OK, Can I do it? Can I handle this amount of talent that is surrounding me? Can I give my best? I don’t know,’” Gau says. “This pressure, once you get used to it, is kind of fun. But at the very beginning, it makes a big impression.” 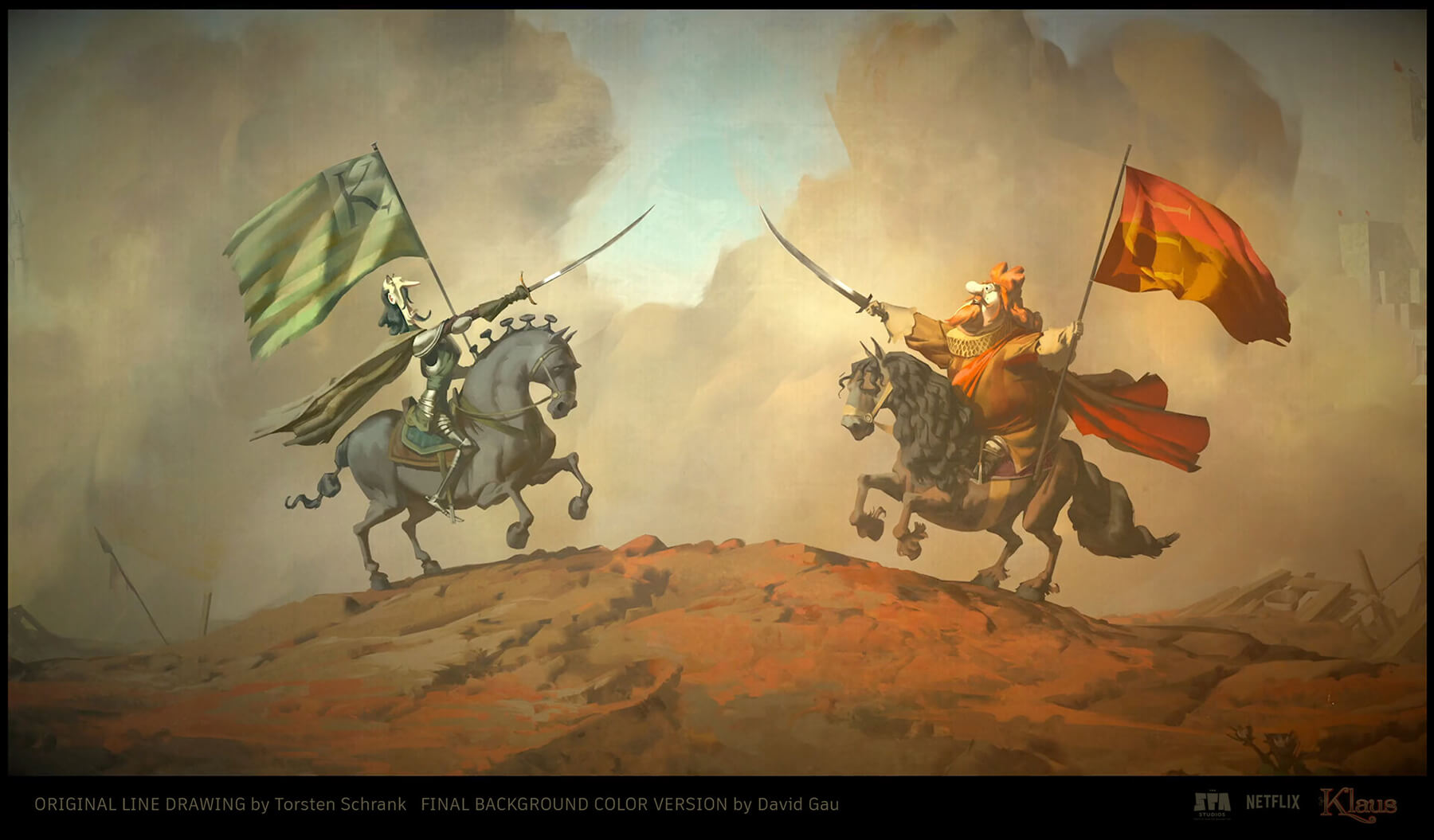 Gau recalls one “epic moment” when he confronted that pressure head-on. During a storyboard meeting led by studio director Sergio Pablos, Gau remembers a room filled with silence and tension. Pablos was unsatisfied with the framing of a particular shot, one in which the characters of Klaus and Jesper encounter one another for the first time. After Jesper flees in terror, Klaus is shown from behind, picking up a bag that Jesper has dropped while his other arm holds a sharp woodcutting axe.

“Sergio Pablo was arguing, ‘This is not what I want. I want it more clear. More negative space. The thing is not clear.’ I felt I understood what he wanted to convey. And it was not my task, but I raised my hand after a big silence and I said, ‘I think I can handle it,’” Gau recalls. “And Sergio said, ‘Oh, thank you, David.’ There was a small applause, and then I thought, ‘Oh, no! What have I done?’”

From there, Gau says, he drew up more than 10 different ideas for the shot, taking into consideration each of Pablos’ specific directions. He then whittled it down to six of the best proposals to present to Pablos, who ended up selecting one that he liked. Gau helped out similarly with another shot later on, during a sequence in which Klaus bellows out his iconic “Ho! Ho! Ho!” laugh for the first time.

“It’s a very wide shot where Klaus starts to laugh and a lot of bears are seen running away. This idea was pretty crucial for Sergio, and I developed like 20 [approaches] until he got to one that he liked. I think we picked a good one, and it’s the one that is in the movie,” Gau says. “The good thing about Sergio is no matter if you like him or not, he’s usually right. … And from the point of storytelling, he’s a master. He’s a leader you can follow. You feel you are in good hands.” 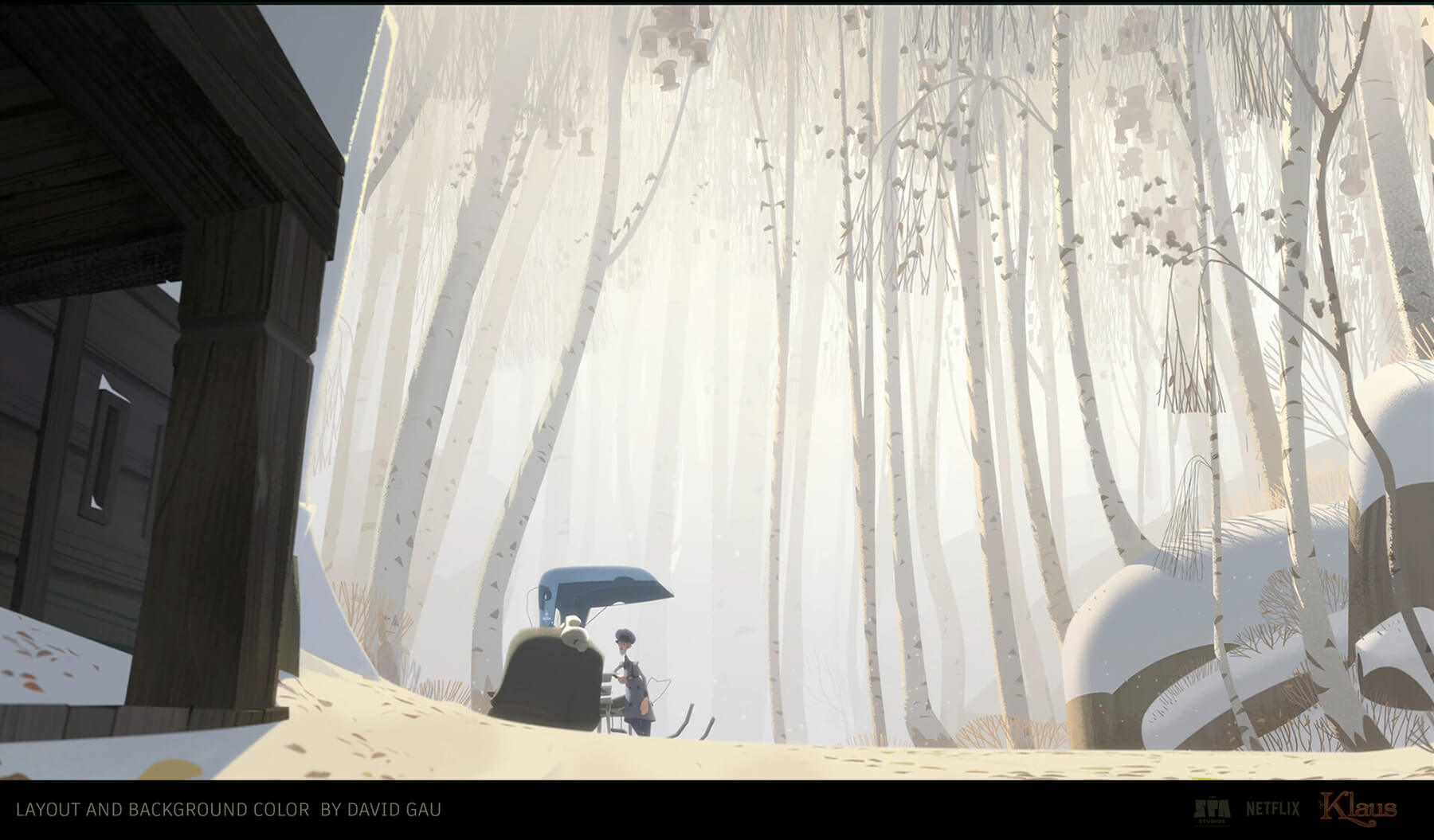 One of the overarching goals for the film, according to director Pablos, was to showcase a new kind of 2D animation that incorporated new technologies, such as volumetric lighting, while adhering to the traditional 2D animation pipeline. “We are picking up traditional animation where it was left off, which was sometime in the ’90s,” Pablos explained in a behind-the-scenes interview. As such, Gau says, the SPA Studios art directors had to train its layout and background team for a role that hadn’t really existed within the industry for almost two decades.

“They kind of reinvented me again,” Gau says.

Gau credits his DigiPen education for providing him with a solid, generalist foundation that allowed him to learn and adapt quickly to the demands of the job, as well as contribute to other roles, such as character posing. While Gau says he initially struggled with adapting to the strict processes used at the SPA Studios, by the end of the production, he was recognized for being one of the fastest and most efficient background artists within his department.

The rest of the team also changed over time. What started as a 40-person operation when Gau arrived in late 2017 eventually grew to more than 250 during the peak of production. After the film was finished, Gau was invited to stay on for a longer period and help out with various marketing-related tasks.

“When I arrived, we were at 40 people, and when I left it was 40 people,” he says. “I feel that they appreciated my work and dedication to the movie, so I stayed until the very ending.”

Today, Gau is working at Sunshine Animation Studio in Madrid, helping to develop animatics for the upcoming video game TemTem, a Pokémon-inspired adventure being published by Humble Bundle. In the future, Gau says he would love the chance to work on more feature animated films.

You can check out more examples of Gau’s work on his ArtStation page.